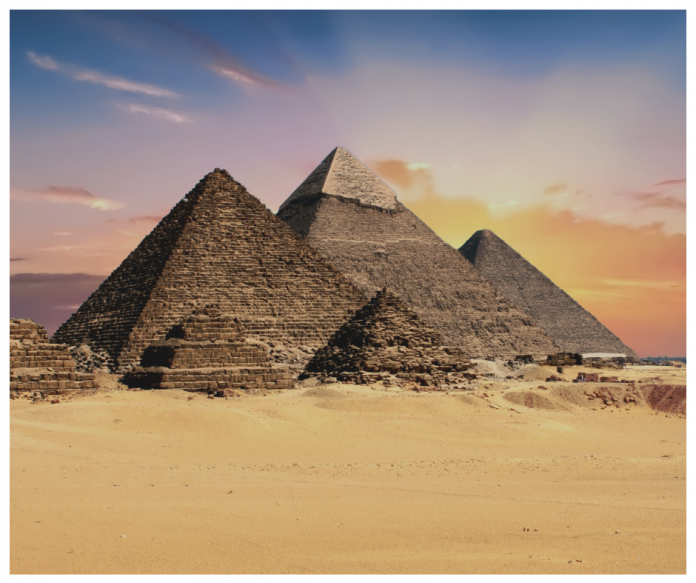 I was in my early 30’s when my former boss – an American,  called me for an offer that changed my life forever.

He was offering me a job in the Middle East – Alexandria, Egypt to be precise.

I accepted without much thought. I was terrified and excited at the same time.

I was going to lead a team of Egyptians – Wow thinking about it now made it seem like the most impossible feat.

But it wasn’t impossible. It was a lot of things, but one thing is for sure, it was not that.

So off I went in the early weeks of January 2012 from the Philippines and all the way to Alexandria, Egypt. Dressed in layers as it was the winter season with 2 full checked in bags, a bucket full of nervousness and a dash of hope.

I was excited and ready to conquer the world – at least Alexandria, Egypt that is.

Me at the base of the Pyramid of Giza Cairo, Egypt

So, I’ll share with you 5 things that I learned working in the Middle East and what people don’t tell you.

1. Being late is in fashion.

This is one of those things that I had to truly experience to understand. There were several instances that I arrived 10 mins before the appointment and found myself waiting for 1 to 2 hours before people started arriving.

It was initially frustrating, but eventually I came to realize that they weren’t being rude, it was a way of life.

So, note that when you set an appointment, be late. Chances are everyone else will be late too.

2. Being a woman in a leadership position is rare.

In the company I used to work for, we were 2 in the senior leader team of 12. When I went to a training in Cairo where majority of call center leaders met, there were 4 out of 20.

I felt at that time that I had to do my part in not only being a leader but a woman leader.  Something I have never really experienced before.

Having grown up in a country where there were 2 women Presidents in my lifetime and then moving to a country where it’s a rare feat to be a woman leader, it was overwhelming but truly humbling at the same time.

So, to my fellow Girl Bosses out there, this is something that you will experience when you work in the Middle East.

Me and my Women Leadership Team in Egypt

Take the opportunity to shape the culture where you can influence because it helps establish women leaders more than you probably have experienced working in Asia, North America or Europe.

It will come with its own challenges, of course. But you are going to be in a position where you can truly make a difference and inspire women in the Middle East to step up and be recognized as amazing leaders that they truly are.

3. Ramadan is an experience.

I say this because there’s the religious aspect of this but also the part where people fast – no water, no food, no cigarettes from sunrise to sundown.

When I went through my first Ramadan, I had to truly be mindful of a lot of things.

Like having coffee in the office was something I had to delay and, in some days, completely forget about because it just seems rude to be drinking coffee while my team has not eaten or drank anything the whole day.

My team appreciated this, and it was a small price to pay really when compared to my team’s sacrifice.

Since I worked in a global call center, I had to talk to my counterparts from other countries to adjust break schedules to accommodate when the “breaking of the fast” happens for my team.

My counterparts from the US and Philippines were all happy to comply and support. While it’s a small adjustment, it’s something that I was mindful to ensure the team is engaged as the whole country goes through Ramadan.

Check out my 50 Team Engagement Activities Guide that will Transform your Team Today!

If you get the chance to experience Ramadan in the Middle East, it’s one of the most peaceful and wonderful experience that you can ever witness in your life.

Enjoy it with your colleagues while being mindful on how you can be supportive. They will appreciate it more than you know.

4. Family is important and sometimes bleeds into people’s careers.

While I have seen this happen in North America and Asia, the Middle East takes this to a whole new level.

One of the most memorable experiences I had was having to talk to the parents of one of my team members asking me to refuse promoting their daughter because she was already engaged to a guy who will give her a better life. That the company had to stop giving stupid ideas to their daughter on being successful in the workplace.

While this seems ridiculous (believe me I was equally shocked), I respect the parent’s concern for their daughter.

In that meeting, I had mixed feelings on just how the conversation was going but I was also respectful because I realized just how influential families are in the careers of their sons and daughters.

At the end of that meeting, we agreed to disagree. I explained to the parents just how talented their daughter is and that she has leadership potential that’s why she is being offered the promotion.

I politely told them that I will not stop the promotion of their daughter and that as an adult, she will have to either take it or not. The decision will be her daughter’s and not the company’s.

They were not happy with how it ended but that’s how I handled that.

After that meeting, I thought long and hard about that experience. If one of my team members is experiencing this with their families, chances are, it’s also happening to my other team members and they are just not telling me.

Pretty soon I will be hounded by their parents too. And I didn’t want a repeat of that meeting for sure.

The next thing I did was to have an open house event where my team can bring in their families. I was going to make it a venue to talk to the families about the work that we do and how great their sons/daughters were doing.

I was nervous on how it will go but I was determined to try a different approach on engagement because of just how powerful their families can be in their employee experience.

The day came and my stress levels were in an all-time high.

In the event, I talked about what the company was about, how their sons and daughters were making a difference in our client’s customer experience. I awarded the top performers with their family to end the event.

Me and my Leadership Team in Egypt

It was a success and I had the parents thanking me for what I do and for giving them an opportunity to truly understand the work that their children do as well.

I was over the moon. Like I can’t wipe the smile on my face kind of happiness that day.

This became a regular event and anticipated by my team too as they show off where they work and have their families around in the center. More importantly, witness them getting awarded for being a Top Performer in the company.

I was more than happy with the results  – decrease in attrition, increase in employee satisfaction and a highly engaged team at the same time. Win- win!

When you work in the Middle East, know that family plays quite an important role in the lives of your employees. Be respectful of this and find ways to engage your teams that may involve their families.

5. Competition within the workplace can become brutal.

Competition in the workplace can be a good thing as it motivates the team to try harder and be creative. In working in the Middle East,

I’ve observed that competition can be quite intense.

In several instances, I have seen competition so intense that it becomes personal. What I realized then was that my team was very passionate with what they do that competition escalated fast.

Oftentimes I found myself having to address the team’s issues because of intense competition that strained the team’s relationships.

Lines have blurred that the competition became an avenue to attack another person’s life and criticize to a fault what should be or what shouldn’t be etc. It was a mess!

This is one of those things that you’ll have to deal with as it happens and something that will be come up if you work in the Middle East.

What I learned in this whole ordeal though is learning different approaches in resolving conflict and communication. I used to think I had strong communication skills before I started working in the Middle East but when I started handling these difficult scenarios, I had to up my game.

In the end, I learned that diversity meant truly being open not only to other people’s backgrounds but also allowing yourself to change your mindset to customize the message that will not only be accepted but also embraced by the team as well.

So, there you have it.

Living and working in the Middle East remain to be the most life-changing experience I’ve ever done in my life. I have learned so many things that I wouldn’t have experienced had I said “No” to my former boss and stayed in the confines of my office in Manila.

So, if you get the chance to work in the Middle East, take it. Don’t be afraid.

You’ll figure it out as you go.  You’ll meet people and experience a culture that books and the news don’t even do justice.

I have met some of my life-long friends in the Middle East and happy that they are still very much part of my life today. I also met my husband in Egypt and now we have an overactive 3 year old in tow.

Life has truly changed for me and I wouldn’t have it any other way.

So, will I do it all over again?

Daisy Casio is a Passionate Operations Leader with over 16 years of work experience in various leadership roles. She has run diverse teams in multiple locations and has built teams from the ground up. She is the Founder of ChampLeaders Blog dedicated to transforming leaders to Champions. She writes about leadership, management, productivity, career tips, team engagement and many more.

The post 5 Things Nobody Tells You About Working in the Middle East appeared first on ChampLeaders.

Amazon Expects Office Employees To Return By The Fall