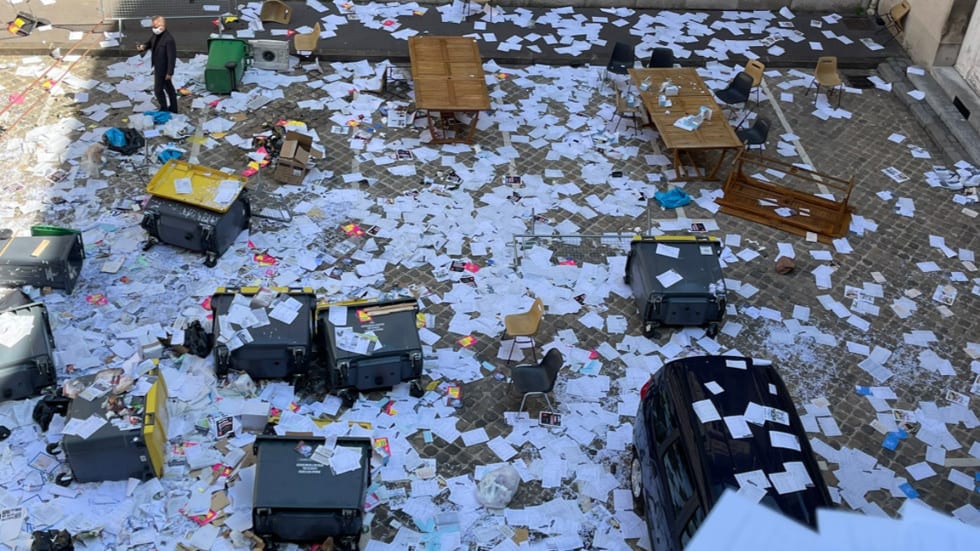 Garbage collectors and sewer workers in Paris have overturned trash containers and occupied a municipal building as part of protests against sweeping civil service reforms planned by the French government.

On Wednesday morning, dozens of people were filmed protesting inside the town hall of the French capital’s 13th arrondissement, some of whom could be seen tossing leaflets and other pieces of paper in the air.

Pictures showed the corridors of the town hall strewn with paper, while one image appeared to show minor damage to some cupboards that had been ransacked.

Outside in the courtyard, angry sanitation workers tipped over more than a dozen waste containers in a symbolic gesture of their contribution to society.

The Revolution Permanente website said hundreds had attended the protest, in which one person was reportedly injured. Two garbage collectors were fined for demonstrating.

The event, organized by the General Confederation of Labour (CGT) trade union, was condemned by Jerome Coumet, the mayor of the 13th arrondissement.

“Violence, theft and damage should not be considered legitimate actions,” he said in a statement, adding that he did not associate the usually “constructive” CGT with such action.

Many of the documents thrown around and destroyed related to France’s Covid-19 vaccine rollout, while face masks were also stolen, Coumet was quoted by broadcaster BFMTV as saying.

Wednesday’s protest came after town hall officials said they would press ahead with the implementation of employment reforms, which workers claim will reduce their holiday time and infringe on their right to protest.

The plans, approved by President Emmanuel Macron’s cabinet in 2019, would scrap certain exemptions allowing some people working less than 35 hours a week while still retaining a full salary.

The aim is for workers in some professions to work longer, enabling Macron’s government to cut some 120,000 civil service jobs over three years as part of a cost-reduction drive.

Antoine Guillou, the Paris mayor’s deputy for public services in the 13th arrondissement, has said the town hall must make the necessary changes by January 1, 2022.

What Can We Expect For The Future Of Office Occupancy?

What Can We Expect For The Future Of Office Occupancy?