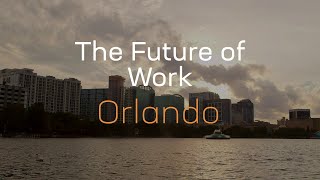 For many, Orlando conjures up carefree images of retirees and families frolicking around the Magic Kingdom. But Orlando’s story is also one of breakneck growth. The metro area has added 1,000 people or more each week since 1950, and it’s projected to add roughly 1,500 residents each week for the next 11 years, topping out at 5.2 million by 2030.

But Orlando’s growth arc is about far more than just a meteoric rise in population. Growth is fueled by two distinct groups: migrants, and retirees. In recent years, more than half of Orlando’s increase in population has come from domestic in-migration (with 32 percent coming from international migration). In 2017 alone, the area welcomed roughly 50,000 Puerto Ricans fleeing the aftermath of Hurricane Irma. At the same time, baby boomers are flocking to the area seeking health care and affordable housing. By 2030, seniors will outnumber those aged 0-17. These demographic shifts will have profound implications for Orlando’s workforce, educational institutions, and international competitiveness.