Future of Work: Towards Decent Jobs for All? 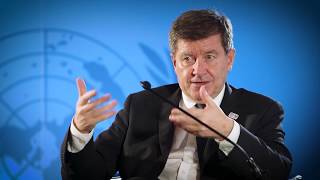 Global economies at all stages of development are going through profound changes in the nature of jobs and labour. Demographic shifts, global influences such as climate change, and technological innovation are shaping the future of work in ways that risk creating a mismatch between today’s training and tomorrow’s employment options. How can nations anticipate the jobs of the future to ensure that workers receive appropriate skills development while safeguarding their right to decent work? And will Japan be ready for the work of the future?

In this video, International Labour Organisztion Director-General Guy Ryder joins UNU Research Officer Cale Salih for a conversation discussing these pressing questions on the future of work, along with their pertinence to the Sustainable Development Goals.