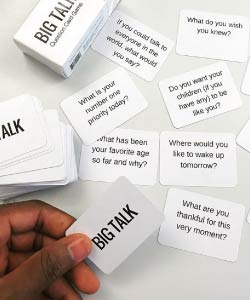 Big Talk. I loved the expression as soon as I heard it. Enough with “small talk,” let’s shoot for more meaningful conversations. I had been developing probing conversation starters for over 20 years, when I came upon Kalina Silverman’s TED Talk. I was also excited to learn she’s a fellow Kellogg B-School Alum and developed her own “Big Talk” Conversation Deck.

In her TED Talk, Kalina Silverman, co-founder of Make Big Talk, shares her experience of asking strangers, “What do you want to do before you die?” Shortly after we launched our Diversity Thumball, a tool to promote conversation on topics of diversity and inclusion, we ran a similar experiment. We asked strangers to answer a random question from our Diversity Thumball. We were amazed at people’s willingness to talk and at the stories they shared. As we reflect on the experience, sadly, we realize we no longer have any association with the folks we interviewed.

Around the same time, we asked trainers and facilitators how they felt about using Thumballs to promote discussion and conversation around topics of diversity, leadership, managing change or building trust. While many embraced the idea and could quickly imagine its usefulness, several others said, “Oh, I love that, but I don’t know. Maybe I could use it at the end of the day, but I don’t think I’d start off with it.” Or, “I can see using that with my more seasoned groups, but not a group that is just forming, and certainly not with my incoming Freshmen.” Seasoned facilitators explained that when people are just forming new relationships, they are fearful of being judged and are quite sensitive about sharing personal information.

This issue is one of safety and feeling safe. With total strangers, who you will ever see again, we often feel safe in our anonymity, and willingly share intimate details. At a trade conference, I remember a young woman telling me she was pregnant. She said I was the first person she’s told. She hadn’t even told friends or family yet and was excited to share, especially knowing her secret would not be spread.

Similar to college Freshmen, employees carefully consider what’s appropriate to express to supervisors or colleagues. In fact, when vetting conversation prompts, my staff has often told me to exclude prompts that might put participants in an awkward position.

While Big Talk might be the goal, facilitators should consider when deep discussions might be uncomfortable. Recognize that making Big Talk feel safe might require some “Middling Talk,” discussion topics that build understanding, without getting too personal. That doesn’t mean you need to talk about the weather, but you might ask questions such as, “how did your birth order shape your childhood?” or “What’s something you hated as a child?” Both of these prompts are more interesting and insightful than small talk, but won’t cause stress. Many Middling Talk prompts can be found on the Shaped by Our Past, What Makes You You?, Getting to Know You, and Favorites Thumballs.

Make “Big Talk” when the Time is Right!

Answering a single deep question may be a launching point for conversation and relationship building. But, that one question does not promise the start to a more meaningful relationship, especially if asked at the wrong time. Be sensitive to situations, surroundings, and underlying social and developmental needs.

Mental health concerns at SMEs have surged during the pandemic

Work2.0 is a #FutureOfWork magazine shedding light on the impact of technology, social-economic and political impact on the future of work.
Contact us: info@work2.org
© Copyright 2020 - Work2.0 #FutureOfWork Community
MORE STORIES
vision