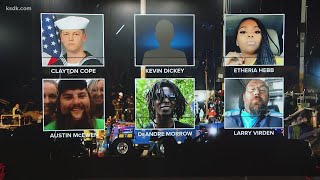 A third day of searching ended at the Amazon Delivery Warehouse in Edwardsville as crews turned their efforts at the site from rescue to cleanup and recovery.

Police told 5 On Your Side there are no reports of more people missing.

Six people died Friday night when an EF-3 tornado tore through the facility.

The victims were Deandre Morrow and Etheria Hebb of St. Louis, Kevin Dickey of Carlyle, Larry Virden of Collinsville, Austin McEwen of Edwardsville and Clayton Cope of Alton.

“At least I got to say I love you,” said Carla Cope.

When Carla saw that a storm was taking aim at the Amazon warehouse where her son Clay was working, she picked up the phone to warn him.

“We told him it looked like the storm was heading that way and that he needed to get to shelter,” said Carla.

Clay told his mom he would do so, but only after he warned his coworkers.

“He was trained in the Navy,” said Carla. “That’s what they do, and in his job, he would’ve put himself out there no matter what.”

Once the storm passed, Carla immediately knew something wasn’t right when Clay didn’t answer her calls.

“We were lucky enough to get there before they blocked the way, before no one could get up there,” said Carla. “We parked and walked close, as close as we could, to the building. We could see all the damage on the building, and it was on the south end where he would’ve been.”

There is a storm shelter inside the Edwardsville facility, but it’s unclear exactly how many workers were able to make it inside.

“There were announcements in the building and then our leadership team were going around moving people in as well,” said Amazon spokesperson Kelly Nantel.

“Even if they had a bunker that they could’ve gotten to, the building is large and it takes time to get there,” said Carla.

Unfortunately, Clay and five of his coworkers were killed when the tornado caused the building to collapse.

“There’s nothing that you can experience like getting that information,” said Carla.

Amazon has vowed to reach out to each family to try and help them through this tough time.

“We’re all in the same boat,” said Carla. “There’s no amount of sympathy that can make you feel any better. It’s just going to take time.”

At this point, it’s unclear when the funerals will take place for the six workers who lost their lives.

Six Ways It Can Boost Productivity

7 Tips Productivity Experts Follow When They Fall Behind On Work

Six Ways It Can Boost Productivity

7 Tips Productivity Experts Follow When They Fall Behind On Work